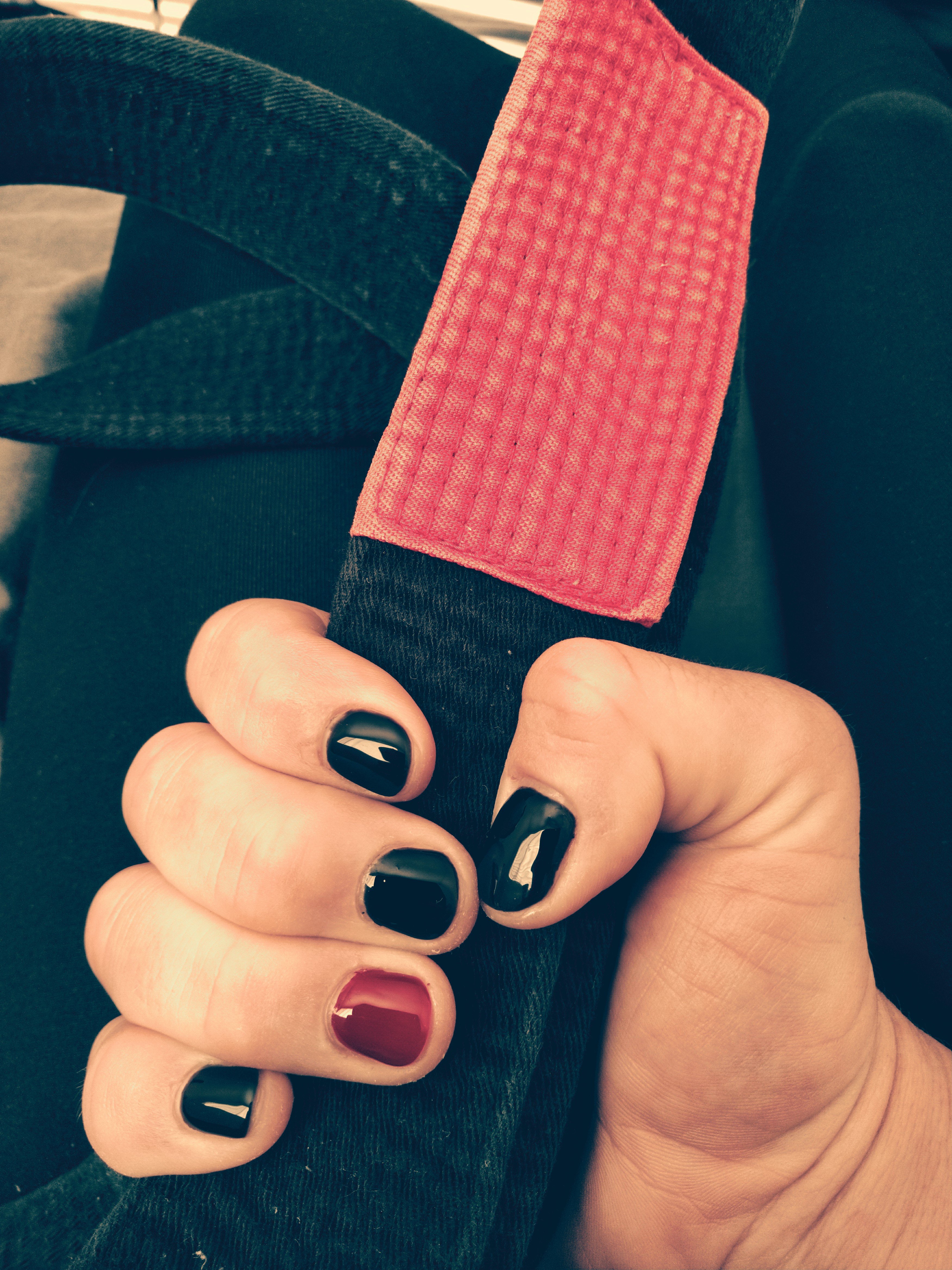 What My Black Belt Means To Me

The Jiu-Jitsu black belt is such a far off dream when you first start training. As a white belt, black belts seem like unicorns. Superheroes. Jedi knights who have reached another level of enlightenment. It almost feels unattainable, years and years away. Surely, when you have reached the black belt level, you will have mastered all of Jiu-Jitsu.

The black belt has certainly been an emotional one for me. It was, first of all, a huge honor. I received my black belt from Andre Galvao, after having been a part of the Atos team for about a year-and-a-half. I can’t think of anyone I would have rather received this belt from. I believe I was his third female black belt promotion ever, and I feel so honored by this. At the same time, I struggled with intense feelings of unworthiness. I was not at all expecting this promotion. My competition season had been good overall, but at my last competition, I had a very lackluster performance. I wasn’t feeling great about myself as an athlete. I was starkly aware of the many weaknesses in my game, and certainly didn’t feel ready for the intense level of competition at the black belt. All of a sudden that far away belt was around my waist, and I didn’t really know what to do. I didn’t cry when I was promoted, and I always cry. I just felt kind of numb. I guess I had expectations for this day. I was supposed to feel a certain way. It was supposed to be the best day of my life, with lots of happy tears, surrounded by friends and family. I felt guilty for not feeling that way. In many ways, it was just another day.

But my professors believed in me, and I think they saw something that I couldn’t see yet. Over the next few months, I threw myself into training and competition with a desperate desire to prove myself. And I did really well. I was hitting the podium. I earned my first double gold at black belt in the second month. I competed in my first Pans and Worlds at black belt. No, I wasn’t winning everything, but I was surprising myself every time. I was performing better than ever before, and I was sharing podiums with women I had looked up to for a long time. It was surreal. In many ways, earning my black belt took away a lot of the pressure I had been feeling at lower belts. Being at the bottom of the food chain again, in a category with women who had been black belts for years, I was the underdog. With no expectations, I could just go out, have fun, and try to kill everyone. This lack of expectation allowed me to rekindle my love for competing.

Even though I have only held this belt for a short amount of time, it has been an intense period of growth, self-discovery, and maturation. I started to find myself all over again at black belt.

I figured out what I want, and I’m learning to focus on what is important to me, not what others expect. I’ve learned to have a confidence that is based, not on my performance any given day, but on who I am. My focus has shifted from winning and achieving the next belt, to just improving myself and my Jiu-Jitsu. I’ve started thinking more about the future, and what I want beyond competitive Jiu-Jitsu. I’ve come into my own as an instructor. I’ve begun to examine my Jiu-Jitsu with a critical eye and think about how I can make the most of every training, how I can be smarter with my movements, and how I can start fine-tuning my game.

Earning my black belt helped me get rid of my ego, in some ways. There is no longer this need to prove myself, because I’ve already reached that milestone that everyone dreams about when they tie on their first white belt. I train with some pretty fantastic colored belts, and I’m going to get tapped by them. I just had to accept that and not let it bother me. Now, whenever promotions happen at the gym, a part of me feels relief, because I don’t have to worry about getting promoted, or not, anymore. Another small part of me feels a little sad because that phase of life, that excitement and nervousness surrounding the upcoming belt level, is over.

I’ve learned to embrace who I am. I’m sensitive, and emotional, and that’s OK. I feel deeply. I care deeply. But I am not weak. And I am not a quitter. I am a warrior, and I love this sport and the people with whom I share this journey. I’ve learned to have great expectations, both of myself, and of others, and to dream big. I’ve learned to value myself and not limit my worth to what someone else thinks or offers me. I’ve learned to love more deeply than ever before, but also learned that some people will be there for you unconditionally, and those are the people to hold close.  I’ve learned that it’s OK to fail, and I’m not afraid to go out and try. Or even if I am afraid, I’m going to do it anyways.

What does my black belt mean to me? It represents years of struggle. The  intense highs and lows of a path less traveled that I have thrown myself onto wholeheartedly. It represents the lessons that I’ve learned, and the people who have helped me along the way. It was forged through tears, sweat, blood, prayers, and a stubborn refusal to give up. This belt means so much to me. But at the end of the day, it’s only a cotton belt, and it doesn’t define me. I think the most important lesson this belt has taught me is to enjoy. To set goals and work hard to achieve them, but also to enjoy the day-to-day, and appreciate the beautiful life I am blessed to live. “Don’t miss the forest for the trees”, as they say. It’s a beautiful forest of a life, and I’m learning not to get too caught up in the trees that come up in my path. Whenever I start to feel down or frustrated, it always helps to step back and look at how far I’ve come, and to appreciate all of the blessings in my life. This is such a beautiful adventure, and it is only just beginning. 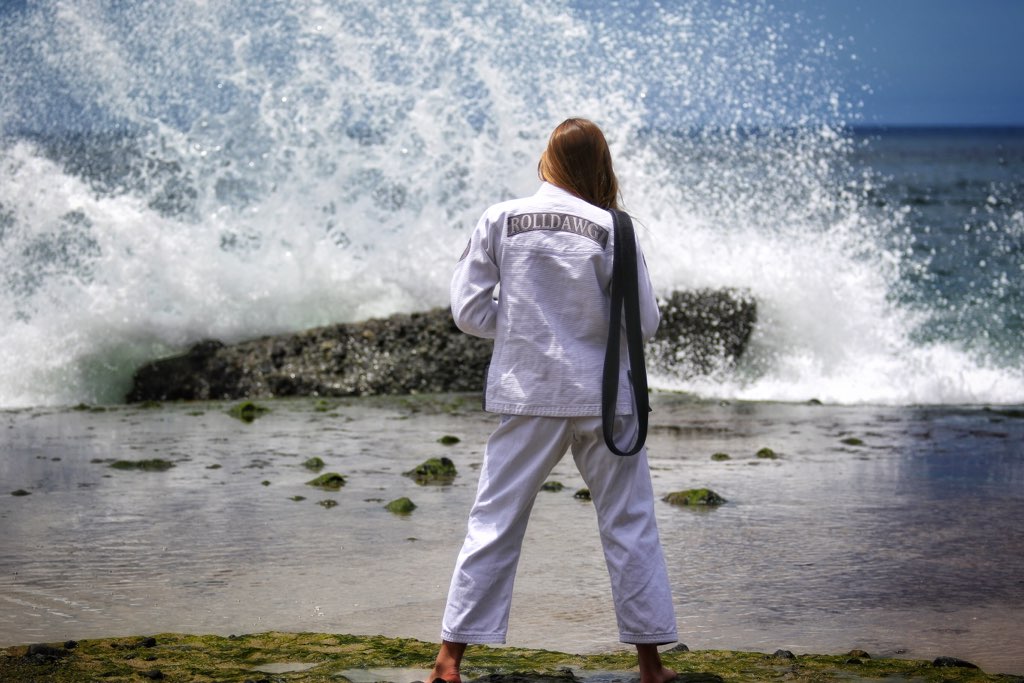